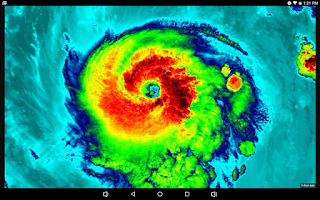 There she is, Hurricane Irma. I am not a fan of this at all. This could be the reason that everyone leaves Charleston. I was in Charleston for Hurricane Hugo back in 1989 and it was devastating. There was so much damage and loss of lives, just plain sad. We were without water and electricity for weeks, which seemed horrific back then, but now, I think that I could honestly say that electricity is a luxury. I am watching the info about Irma and how quickly it has formed and how quickly it is picking up power and it might turn out to be one of the worst hurricanes recently. Charleston hasn't had a bad one since Hugo. There have been small ones that came close, but nothing this large. I am hoping that Irma goes straight north and disintegrates into nothing. None of the islands in the Caribbean or any of the states need this freak of mother nature touching us. Hurricane Harvey has just recently hit Texas and they are flooding everywhere there. No one in the world needs this.
I am ready to start traveling, but not this soon. Even though Irma is still possibly close 2 weeks away, I am trying to get prepared now. We went to the store today and picked up some more canned goods and water. Better to be safe and prepared. we put the supplies in our motorhome, Gima-ta, and still need to get extra portable propane tanks. We are ready to go if need be. There are always the necessities for hurricane evacuations, but sometimes the basics are just enough. I am hoping the storm will just go down in history as a scare, so no one has to get hurt or lose their sanity. On Sept.15th, we are due to go on a cruise out of Charleston and go to the Bahamas for a 5-day vacation, which I'm getting super excited about, but would rather put my good vibes out there in hopes that everyone will be ok who encounters Irma. One more sentence for Irma... stay the f**k away!!!!
***update*** 9/20/2017
Hurricane Irma decided to skim on by Charleston and not hit us at full force. It has been a week since she passed and we were lucky enough to not get as much damage as some places did. Hurricanes go wherever the hell they want to and no weather person can determine where they will definitely go. Irma headed up the west coast of Florida and headed into Georgia to die down there. My awesome Mama lives in Titusville Fl and decided that she wasn't going to evacuate. My Mom says her house has been through five major hurricanes, and that she has been through earthquakes, typhoons, and tornados, so she didn't leave. Titusville is right outside of Cape Canaveral on the east coast, so that area didn't get it as bad, but it was still bad. No major damage for her there. I was asked if I wanted to open the bar up at the hotel that I work at the Sunday before we were going to get shit from Irma. I said sure and they gave me a room to stay in. (great people there) I was making cocktails and popping open beer when the rain started. It was pretty cool watching the tide rise as the rain fell from 14 stories up. It was the quickness of the rising tides that you have to look out for in Charleston. We are known as the Lowcountry ya know! The level of water hasn't been that high in a long time, and I thought, along with many others, that our cars were safe from the rising waters. We were wrong. My car was flooded and it was totaled out. I really wasn't all that upset though. It is after all just a materialistic thing. Yes, it was our ride to work, but it can be replaced. It saddens me to think about all the lives that were lost just in this one hurricane. How can I be selfish when there is that to consider. Some people lost their homes, their families. Yes, I will remember Irma as the one that I lost my car, well probably not, but some will remember it as a tragedy for their family. Jose left mostly with little damage to anywhere. As did Katina. Now there is Maria out there tearing up Puerto Rico.  Please hurricanes, you suck, go away!!! 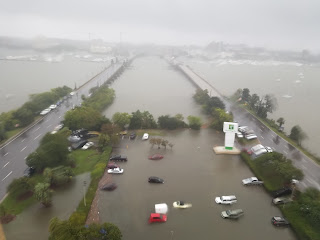