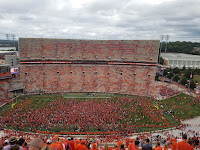 I'm going to start to call every trip I take a vacation. Why not? Even if it is 10 miles down the road, it is still an adventure and a vacation, which actually means "a period of work, study, or other activity, usually used for rest, recreation, or travel". My life is going to be filled with rest and relaxation and I will enjoy every minute of the time I have left on this great big wide world! Now don't get me wrong, I am not going to be lazy, I could never be considered that. I plan on hiking, walking, biking, kayaking, and whatever else I feel like doing. Back to the original topic, Clemson. I had the chance to experience an SEC college game in the quaint little town of Clemson, SC. Clemson was playing Wake Forest at Memorial Stadium and it was a homecoming for them. I really do wish that I had an extra day to explore the town a bit more. I love places that I have never been to and to see the different things that make a town it's own. There was a heaping amount of tiger pride everywhere you looked. Almost everyone I encountered or saw had on the colors of orange or purple. It was a warm feeling to see the pride shining from the whole community. 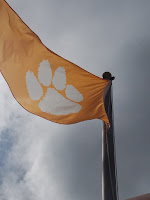 The game itself was an exciting experience that was definitely something everyone should do at least once in their lives. Even if you are not a football fan. It was the fans themselves who were fascinating. The tailgating was everywhere and the smell of food was also everywhere. It is a bit confusing when you first enter the stadium parking areas and your not sure where to go. The officer that was directing traffic knew where each of the lots was, but the employees inside the stadium were a different story. Once we finally got inside the stadium after a long walk from our parking area, we didn't know where we were going. Neither did the 10 employees when asked where our seats were. They all directed us in the wrong direction. At least a couple of people put forth an effort to try. It took half an hour to finally get to our seats. Yes, my legs hurt the next day from the hills and the hike to the top of the stadium 2x's. It was a great workout though. It was all worth it and I would do it again, but I think that I would prefer to mark it off of my list and move on to the next adventure. There are other sports events I want to experience like rugby, ice-skating, bobsleighing, boxing, or even parachuting. I have been to hockey games, to my favorite baseball team game The Braves, Nascar races, and Charlestons local minor league baseball team the Charleston RiverDogs (part-owned by Bill Murray **Bill Murray for President** please). Anyways, back to Clemson. It was a beautiful town, with great people, orange and purple everywhere, and the game itself was amazing. I do have to say that games are much better in person. There was a sea of orange and purple, along with the chanting and the excitement, I believe this was a great thing for me to have done. #goclemson 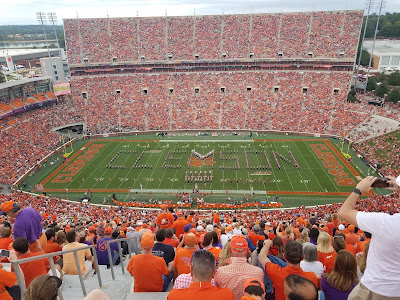 Feel free to comment, give me advice, give me your opinion or just let me know how you are doing!