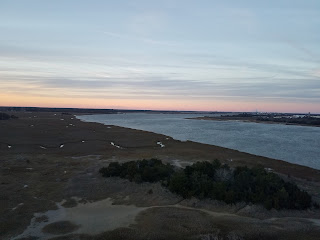 I bet you most people go through life driving down the road or walking down the road or even walking down a beautiful path and don't even notice the sky at all. The ever-changing beautiful sky, that changes within minutes and always different! They could be walking down an awesome alley with nature and flowers all around them and they probably don't even see the beauty in nature and most likely don't even see the big, blue, beautiful sky above them. I pay attention to the sky and the great thing nature has given us. I walk on the opposite side of a street that I've walked down before and I see so much more with just a different view, a different perspective, and it gives me more aawwwhhhh!!  The other day I was walking and realized I was not looking up and around but was fucking looking at my phone. Head down, feet moving, slightly paying attention to my peripheral vision,  and bobbing my head to my music blaring in my ears. No, I wasn't so into my phone that I might of run into you, but enough to piss myself off. So I stopped and had to take a memo. This note, that I took while standing on Queen street was written at the time without the worry about my spelling and swipe to write thingy thing on this overpriced phone. Onward with running.
I had to stop again while I  walked down this odd alley I had never been down before and there were so many birds, I had to take my headphones off because I couldn't believe that they were so loud but they were. It was a nice little neighborhood, a mini neighborhood should I say. As I headed away I still heard the birds for a distance and I was a block away. They were so loud and I swear I think they were jumping on the branches and making the nuts drop all around me! I was walking down their alley, down their road and I really think that they had a beautiful alley that I was invading.
🌍🌎⚓🚢   "The World" is at Charleston right now, meaning the cruise ship, the floating home, whatever you want to call it, I'm not sure what you would call it but it is huge. There are  164 rooms and everyone owns their suite. They own the freaking ship!!! How would you like to get a room on that ship inherited down to you? Would that not be the coolest thing in the world. Go ahead and leave your room on the world to me. I'll travel that way too. I was playing a guessing game while working in the market and trying to figure out who was on this cruise ship.  I know some people you can automatically tell if they are traveling in style by looking all brand new and spotless with name brands all over. But then again I am stereotyping. You can tell who has the money though. There are probably no more than 400-500 people on this cruise ship which is a bunch of people for this floating town. 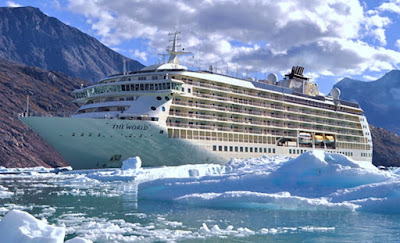