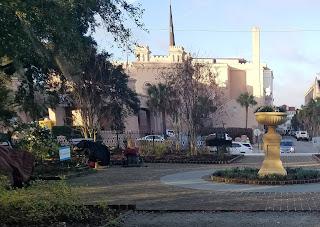 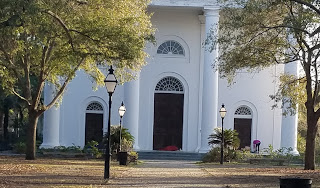 Tears start to form in my eyes every time I walk around downtown Charleston in the early morning and see people sleeping in the streets everywhere. I see them on the swings at Waterfront park, at the Aquarium, in front of churches, in the alleys, on benches on every street, and even curled up under trees. I try and do a small part to help ones in need and give food when I can and a dollar here and there. I know that I could do more and the guilt of not doing so does hurt my heart and pinches my soul and makes me sad. I know that most of the homeless couldn't prevent their situation and others have chosen that way of life, but either way, I understand that it is hard to get out of a bad situation. I have watched people walk by the homeless and steer clear of them and even go as far as to cross the street to avoid them. I have seen them scared of people who don't have a home if that's not the typical stereotyping. They are humans too and have a heart like everyone else and like the song says, they notice when you don't look them in the eye.
I was sitting at a table in front of a local deli recently eating my breakfast and a lady walked up to me and asked if I had any spare change for some food. I didn't but I asked if she wanted to split an omelet I had just started to eat. I offered her a seat next to me and gave her half my omelet, half my biscuit, and half of my grits while she said yes and started to cry. She expressed her gratitude and proceeded to tell me that not a single person has ever offered her to sit down with them and eat. It was heartbreaking to hear that and we sat there for about an hour and talked about all kinds of things. It was a very intellectual conversation with a well-educated lady who fell upon hard times and was trying to get out of her situation on her own and it killed her to ask for help, of course, I noticed that her pride was strong.  I won't ever forget her and how strong she was but still cried showing her heart.
I know that Charleston is not as bad as some cities with the number of homeless people but in my opinion, 1 is too many. I think it upsets me more that I can't do more right now, but I know that every little bit helps and I plan on continuing to help others as much as I can, whether it be for a homeless person or anyone that is in need. That is just called being a human. "Do unto others as you have them do unto you" The famous mantra which should be the mantra of the world.